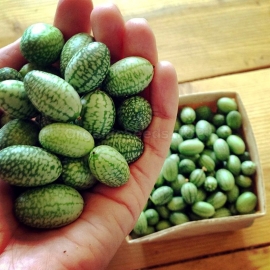 3.00 €
Is it an exceptionally small cucumber or the world’s cutest watermelon? That is the vexing question. Melothria scabra, known as Cucamelon or Mouse melon is a tiny melon that has been creating a buzz in the farmer’s markets.
Compare
Description Reviews Images
Categories